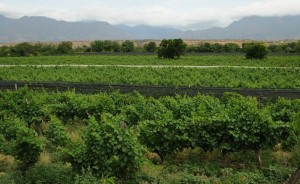 Bolivia is home to some old vineyards at altitudes of more than 10,000 feet (reportedly the highest vineyards in the world). Initially, producers made wines with the Moscatel de Alejandría grape to distill into singani, Bolivia’s version of eau-de-vie. Today, they are increasingly growing international varieties but using the high altitudes to coax out new, marvelous expressions: white wines with a sweet, floral nose and very high acidity, and big, spicy reds with good structure but gentle tannins. However, approximately 99 percent of Bolivian wines stay in the country, and they are extremely hard to find in the United States. Here are a few of Gustu sommelier Jonas Andersen’s favorites.

2012 Ugni Blanc, Kohlberg
The French use this grape (also known as Trebbiano in Italy) to make cognac. But grown at high altitudes, it works as a single varietal. It’s reminiscent of a Puligny-Montrachet.

2003 Don Julio Gran Reserva Syrah, Kohlberg
Andersen pairs this spicy and bold Syrah with llama meat, but venison would be a good match as well.